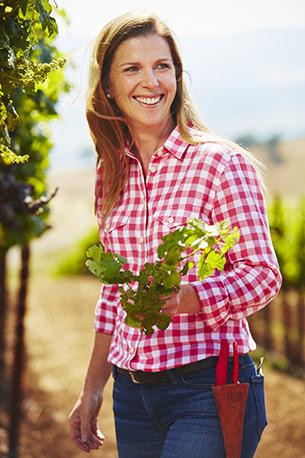 As the last of the grapes from the 2016 harvest rolled through the Stonestreet crush pad toward the end of October, the vineyard team was already hard at work readying the Stonestreet Mountain Estate for winter.  With over 1200 “fish friendly” drains in need of cleaning, cover crops to be planted, erosion-preventing hay to spread on steep dirt roads and wattles dug to prevent rivers from forming on access routes, the vineyard team’s work was far from over. The race had certainly begun to complete everything before heavy rains arrived.  Throughout the end of October and November, in the cellar we were still running at full speed as well: fermentations were finishing, tanks were being shoveled out, pomace was being pressed and wines barreled down.

December was upon us quickly with many cold and frosty days.  With the colder weather, the vines were able to shut down, quite unlike our previous two vintages. This colder weather and accelerated dormancy will most likely result in delayed bud-break in mid-March and a later harvest.  During the dry days, the vineyard team was busy pruning the vines, beginning with the Cabernet Sauvignon. The cellar crew took a short break from “harvest mode” to bottle a few wines in mid-December, just before heavy rains set in over the holidays through early January.  This amount of water is exciting as it enables the soil to replenish its moisture, at the same time filling reservoirs used for irrigation and reduces some of the concerns we have with respect to our recent drought conditions.  However, the wet weather poses challenges as well; pruning on the steep terrain of the Stonestreet Mountain Estate can be treacherous when it’s so slippery.

Pruning continued through February, with 800 acres and nearly 300 blocks it takes a significant amount of manpower to prune before bud break.  The cellar was busy in February working all of the red barrels: pumping out wine, steam cleaning barrels, putting initial blends together and barreling the wine back down.  We are now preparing our Sauvignon Blanc blends for bottling in April. The Chardonnay barrels are topped, stirred and topped again every month as well.  Managing the growth, creation, and promotion of world-class wines keeps us constantly busy!

The team is very pleased with the quality of the fruit from the 2016 vintage so far, we’re looking forward to tasting the fruits of our labor over the course of the next few months as they mature in barrels.